Being Free
As kingfishers catch fire, dragonflies draw flame;
As tumbled over rim in roundy wells
Stones ring; like each tucked string tells, each hung bell’s
Bow swung finds tongue to fling out broad its name;
Each mortal thing does one thing and the same:
Deals out that being indoors each one dwells;
Selves — goes itself; myself it speaks and spells,
Crying What I do is me: for that I came.

I say more: the just man justices;
Keeps grace: that keeps all his goings graces;
Acts in God’s eye what in God’s eye he is —
Chríst — for Christ plays in ten thousand places,
Lovely in limbs, and lovely in eyes not his
To the Father through the features of men’s faces.

According to the Ageless Wisdom, the most advanced animal body of the 3rd Kingdom was to be the vehicle for the evolution of the 4th Kingdom, the Human. However, what we call “animal man” needed a consciousness upgrade. In its current form it was “mass conscious”. Its very highly evolved sensory apparatus was instinctive; however, it did not see its “self”, its dense physical body, as a separate individual.

For this recognition process to go forward, “It was decided about seventeen million years ago (the coming of the Hierarchy and the founding of Shamballa being about eighteen and a half million years ago) to have on the dense physical plane an organization and a headquarters for the mysteries, and to have a band of Adepts, and Chohans who would function in dense physical bodies and thus meet the need of the rapidly awakening humanity.” A Treatise on White Magic P. 380

The upgrade, was initially furnished by the Lords of Flame, “in the third root race in the fourth round.” A Treatise on Cosmic Fire p. 300. This was the “implanting of the spark of mind”. This upgrade eventually enabled the development of Self Consciousness within the species. Obviously, this gift was inseparable from another called Free Will, and unavoidably attached to these gifts was the personal individual responsibility for every thought, feeling, and action we, as conscious individuals, make. Hence, Karma.

Private Property
All of this may be a bit abstract, but by 1776, there were more than 2 million relatively highly evolved individual human beings living in the group of 13 colonies settled on the Atlantic coast of America. Because these colonies were the privately owned property of the British King of England, George III, many of these people, in spite of their advanced consciousnesses, were still living more or less as serfs in these 13 colonies.

By the 17th and 18th centuries, the concept of Human free will and individual equality was well understood. As the Preamble to the Declaration of Independence which was drafted by a committee made up of John Adams, Benjamin Franklin, Thomas Jefferson, Roger Sherman, and Robert Livingston, edited and signed by all 56 members of the Continental Congress clearly indicates, “We hold these truths to be self-evident, that all men are created equal, that they are endowed by their Creator with certain unalienable Rights, that among these are Life, Liberty and the Pursuit of Happiness.”

The Fearless Founders
There was no bargaining with the Owner King. Nobody was talking about the circular delusionary path of “moderation”, of small, safe steps. There were no halfway deals. The fearless Founders went All In. They simply declared their independence from the ownership and rule of the British Monarch. And a Nation was created.

Which brings us to the First Amendment to the Constitution, “Congress shall make no law respecting an establishment of religion, or prohibiting the free exercise thereof; or abridging the freedom of speech, or of the press; or the right of the people peaceably to assemble, and to petition the Government for a redress of grievances.”

So, we have free speech plus at least nine more freedoms detailed in the next nine Amendments. And, as we all are very much aware, what exactly a number of those freedoms mean, speech, equality, and liberty for all for example, has been under assault by the legions of retrogressive sophists from the day the constitution became the Law of the Land.

In the case of Equality we have been assured that the Pigs, George Orwell, Animal Farm, are way more equal than any others. We have seen this con worked out over and over again in our daily lives for the past 240 some years. Its apotheosis was the transformation of The Big Pig in the room, a Corporation, into an actual person. This effectively made 70 to 80% of the world’s wealth the property of a tiny minority of Superior Pigs. 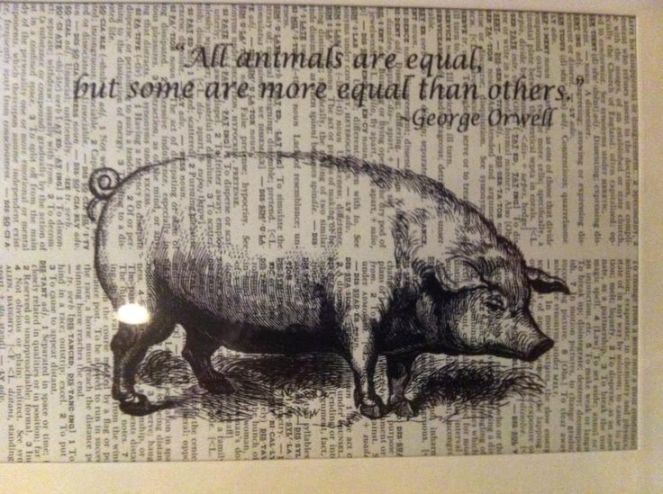 The very simple, very basic point in all of these specific freedoms is that everyone gets all of them. The sophistic charade or “con” that the retrogressive forces of the Kings, or “Owner Class” have been using to maintain their control of Humanity all these many years pretends that one’s free speech, or “free expression”, gives them the freedom to lie, cheat, steal, even, if you’re a really big cheese like Salman of Saudi Arabia, murder by butchering, or any dozens of other imaginative mediums.

Wars, and other actions we call crimes like lying, stealing, cheating, being mean, etcetera, all such behaviors, from petty to serious, are the actions of a separated personality, of a unit of consciousness that is still more or less mired in the illusion of identification with his or her dense physical vehicles. The entire process we call reincarnation is the path to eventually learning how to actually use our Free Will to become co-creators of the unfolding Plan.

Evolution is not a path into Chaos. It is the Path out of Chaos. It is the Path of the Warrior into Light. Although it is a Path of Beauty, Joy and Courage, it is seldom a nice sweet path full of flowers and stuff. I mean if it is getting really easy, sweet, and comfortable, there is, more than likely, something seriously awry.

Free Will requires us to consciously and wholeheartedly resist by any means necessary the efforts of individuals or groups to impose their will on others, including ourselves. Humanity’s only allowable response to the irrational, destructive, cruel actions of the Retrogressive Forces is and has always been to consciously, deliberately stop them by whatever means we have including recently an atom bomb, and to evolve. This we have done both in tiny day to day events and in devastating world wars.

As history reveals over and over again with each turn of the spiral of evolution we move gradually toward the Light of Reality.

This dense fog and the sophistry which lie around the principle of Free Will are ancient. They lie at the bottom of all systems that are designed to generate inequality, division, separation, and the class structures that create and justify the exclusive ownership of property and wealth.

It sometimes appears on the dense physical that we have, after all, been going around in circles. Same old stuff. Different forms, upgrades in technology, etcetera. Get born. Do your thing. Die! This is the eternal delusion pattern of ignorance, to say nothing of boredom.

On the other hand if we have either realized or thought of the possibility of being more than our dense physical vehicles, that there is more to Cosmos than the dense physical dimensions, then a door to imaginable beauty and joy opens.

Sounds so simple, and actually it is. All it really requires is the courage to make a tiny shift in consciousness. We shift from being identified with our equipment to realizing, or at least seriously considering, that we actually are immortal units of consciousness living in an Infinite Cosmos. And we begin to behave that way.

I mean what else makes any sense!

“In legends giants crossed the seas, breaking off monolithic rocks. Let us resemble the giants and our thoughts the monoliths. Let us dispel any timid half-wayness, as otherwise it will take possession of us and deliver us to a shameful execution by beating with accounting books. We know monolithic thinking. When conflagrations are strong, think monolithically.” New Era Community #238